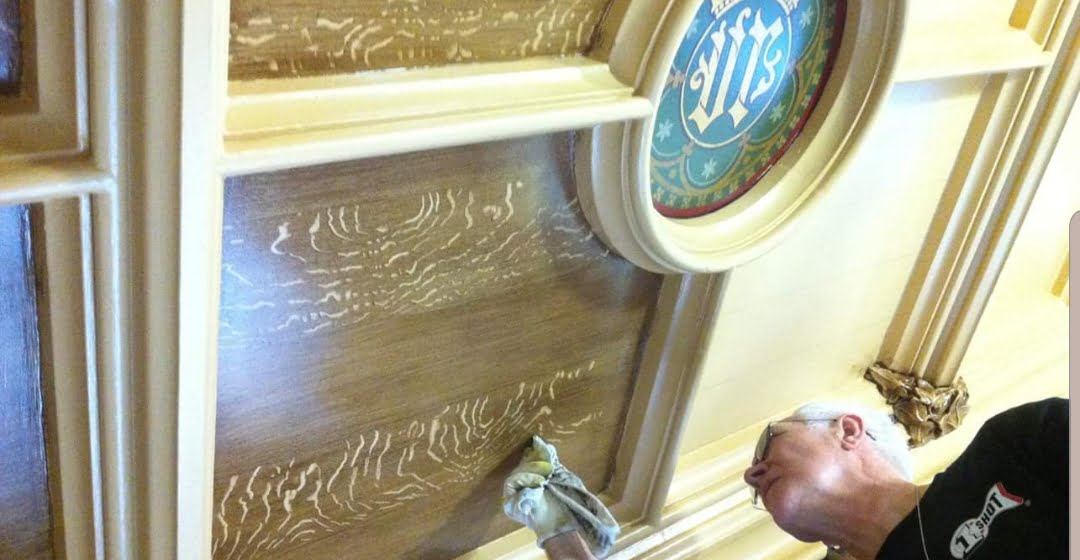 Robert Woodland Decorative Artist London (Decorative and Ornamental Artist), as he prefers to be known. Although not a Sir, he should in my opinion have been on Her Majesty’s New Years Honours list for services to the painting industry. A true Artisan and Master craftsman. 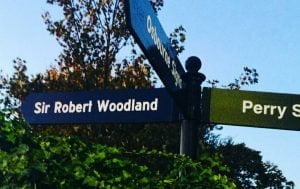 Robert Woodland is an inspiration to us all in the painting trade and one of the most respected and talented Master painters of our generation. This blog is a brief insight to a man who has spent over 60 years in the trade and is still going strong. So here we pay homage to our honourable member: Robert Woodland. For a lifetime of dedication, driven by his passion and enthusiasm.

This particular job was in The Palace of Westminster or Houses of Parliament as we more commonly refer to it. Robert and Russell have spent years in the rooms and corridors of this building carrying out restorative work to the ceilings that were originally oak. Unfortunately, many of these magnificent ceilings were painted in white distemper during and after the Second World War. Following tedious and methodical preparation to remove the distemper, Russell would prepare the glaze and Robert would follow behind, ‘wiping out’ and recreating the natural grain of the oak. I’m told that they could re-grain a ceiling like this in a day and finish by 3.00pm. Decorative Artist London 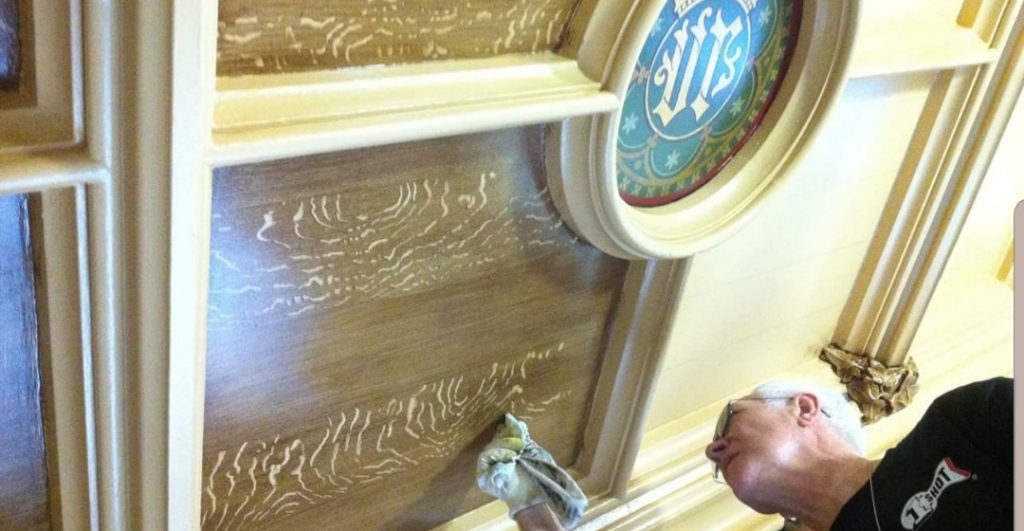 Often known as the Medullary Man or the Oak man, Robert has a gift for  recreating the life-like look of medullary rays (a natural feature of oak, formed as a result of the growing process of the tree). Robert can be seen here adding his signature to yet another historical building, The Palace of Westminster London. Decorative Artist London

Many of us would like to imagine that by the gracious age of 76 we would have served our time and be reaping the benefits of retirement; but not Robert! He is still travelling the length and breadth of the country, climbing ladders, scaling scaffolding and making his way up-and-down on a cherry picker restoring organ pipes to churches and minsters throughout the land. Plying his restorative and decorative craft skills to some amazing buildings and enjoying working life to the full!

Tales of the unexpected!

I’ve been fortunate enough to meet Robert on several occasions and have spent hours chatting with him on the telephone. Each time, like many of us who meet him, we walk away reluctantly in an almost child-like state. Meeting Robert and hearing his anecdotes is reminiscent of a childhood story telling experience. He’s never short of a tale to tell; from his days graining pubs to painting marble effects in some of the most prestigious hotels, to working on Royal Palaces and residences. 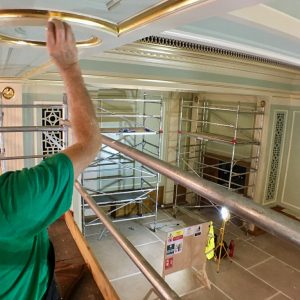 His knowledge of paints, stains, pigments and all things decorative, is like an encyclopedia. And yet I recall that several years ago he contacted me to enquire with, great curiosity, about the modern paints we use today: such as the Tikkurila Paint Systems that many of us here at HPKUK use. It becomes apparent immediately, irrespective of his years and wealth of knowledge; the man is like a sponge. Not only sharing his knowledge but forever absorbing information and wanting to learn the latest products in the world of paint. As the saying goes in our game ‘you never stop learning’.  Here you can see Robert applying gold leaf to the ornamental features of a ceiling in Painters Hall, London.

Robert Woodland – A lifetime in paint:

Derived from generations of painters reaching as far back as 1854; Robert’s Grandfather and Great-Grandfather were painters (or a painter/plumber) as they were known back then. Decorative Artist London

Robert was indentured into his City & Guilds apprenticeship on 29th May 1959 to 11th August 1963. He worked for Charles S Foster and Son (Est 1885) who were church and pub builders from his home town of Loughton in Essex. After achieving his City & Guilds Advanced Craft (with distinction) he went on to gain his intermediate craft award (with Distinction) and then a full Tec and Building Science Diploma. He went on to become a manager for Phil Davis Painting and Decorating, a large, well established painting company in London. Later in life he achieved a Licentiateship (LGCI) City & Guilds Award. 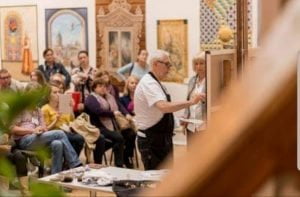 Robert has been, and still is, involved with some of the most respected Master painter associations and gladly shares his passion through the medium of talks and demonstrations with members and anyone who is interested at seminars. He is a past president of the London Association of Master Decorators (LAMD). A Freeman / Liveryman of the Worshipful Company of Painter-Stainers and is a Freeman of The City of London. In 1999 he received the award for a lifetime of outstanding contributions to painting and decorative craft skills from the Salon forever group. Robert can also be found each year at the National Paint Show in Coventry demonstrating his skills and teaching us all, young and old, the tricks of his trade. There’s always a tale to tell too – sometimes of the unexpected! Decorative Artist London 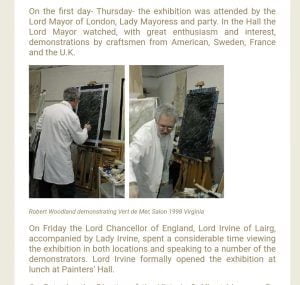 Turning a piece of painted wood into a slab of marble with a swan feather, some glaze and pigment, is an art and magical to observe. It’s no wonder he dons his trademark conjurers hat during demonstrations… just like that!

Roberts wood graining and marble painting skills are remarkable! If you ever get the opportunity to see him demonstrating these age old skills, you are in for a real treat. Robert has been part of the Salon Forever for many years, here you can see a photo of Robert from over 20 years ago demonstrating vert de mar marble, Salon 1998 Virginia.

Many a fine tune is played on an old fiddle 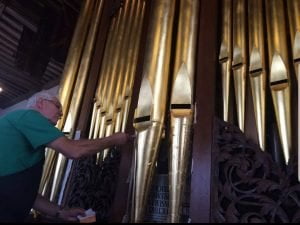 That’s certainly very true where Robert is concerned and although there’s not a fiddle in sight, there are plenty of organ pipes in need of a fine tune or rather a fine finish! Roberts decorative restorative painting skills take him into ecclesiastical buildings throughout London and afar! Currently working on a rather large project in the North East of England, there will be more about that project at a later date, so keep your eyes peeled.  Specialist painter Decorative Artist London

Often commissioned to restore organ pipes in some of the most famous landmarks in the UK, his lifetime of specialist restorative and conservation skills come into their own on projects like this one in August 2016. A 17th Century organ in the Chapel St Peter ad Vincula; one of the two chapels in The Tower of London. The pipes were covered in around 400m2 of gold leaf. Originally built  in 1699 by Bernhardt Schmidt. 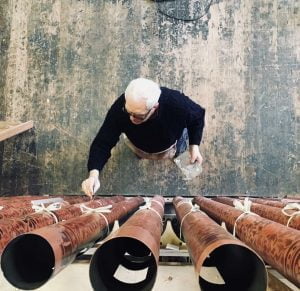 Roberts work takes him to some of the grandest of buildings, from Royal residences to Churches of England. Specialist painter

St Stevens Church Rochester Row, Kensington Palace, The Palace of Westminster (houses of Parliament), Bagshot Park (Royal Residence) The Grand Lodge of England, The British Museum, The Tower of London, Tattershall Castle ( the steam boat on the Thames) Harrods, Harvey Nichols, The Mandarin Hotel. To name but a few! The list is endless… One of Roberts favourite projects was the oak graining he and Russell carried out for the Lord Chancellor of England – Lord Irvine of Lairg in The Chancellors Residence. Some amazing medullary rays, I’m told. (Pictures unfortunately not available).

When HPKUK was formed in 2015, Robert was there to offer advice and encouragement, always on hand to help fellow brothers of the brush and craftsmen and women alike. He’s curious to learn what projects our members are working on and what paints and products we are using. We aren’t by any means a SALON but we are a group of dedicated, serious and committed craftsmen, who extend and enhance each others levels of communication through being a part of a group of specialist painters.

Robert’s son Russell is also a very accomplished gilder and grainer, plying his own craft skills throughout London and the South East and Europe. Russell Woodland is one of our Specialist Kitchen Cabinet Painters in London and an active member of our talented group. Find out more about Russell coming soon here. Decorative Artist London

A True Craftsman and specialist painter 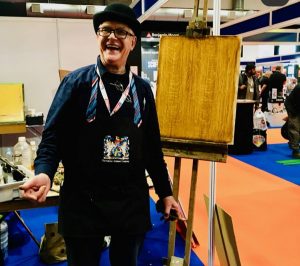 A true craftsperson applies their skills with care and attention to detail. Robert’s craft is fuelled with dedication and enthusiasm,  irrespective of who his clients are. Robert acknowledges and celebrates our skillset with us and the area of specialism we have chosen as kitchen and furniture painters. These are the fundamental reasons we came together as a group and formed HPKUK. Thank you Robert! Specialist painter

Nowadays, Robert’s work is mainly concentrated on the restoration of organ pipes, where he can be found applying endless books of gold leaf and carrying out the most intricate detail with his friend, fellow restorer and conservator Debra Miller, to some of the most famous architectural buildings in the land.  You can find them on Facebook: The Upright Gilders Specialist Painter Decorative Artist London

Robert has worked on so many projects in his lifetime with a plethora of many stories to tell – you could definitely write a book, never mind a blog! We will revisit and add some more tales and information about the life and times of this remarkable man and his amazing talents in future blogs. 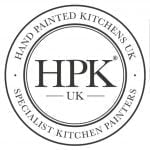 HPKUK is our registered trademark and a private limited company not to be mistaken. 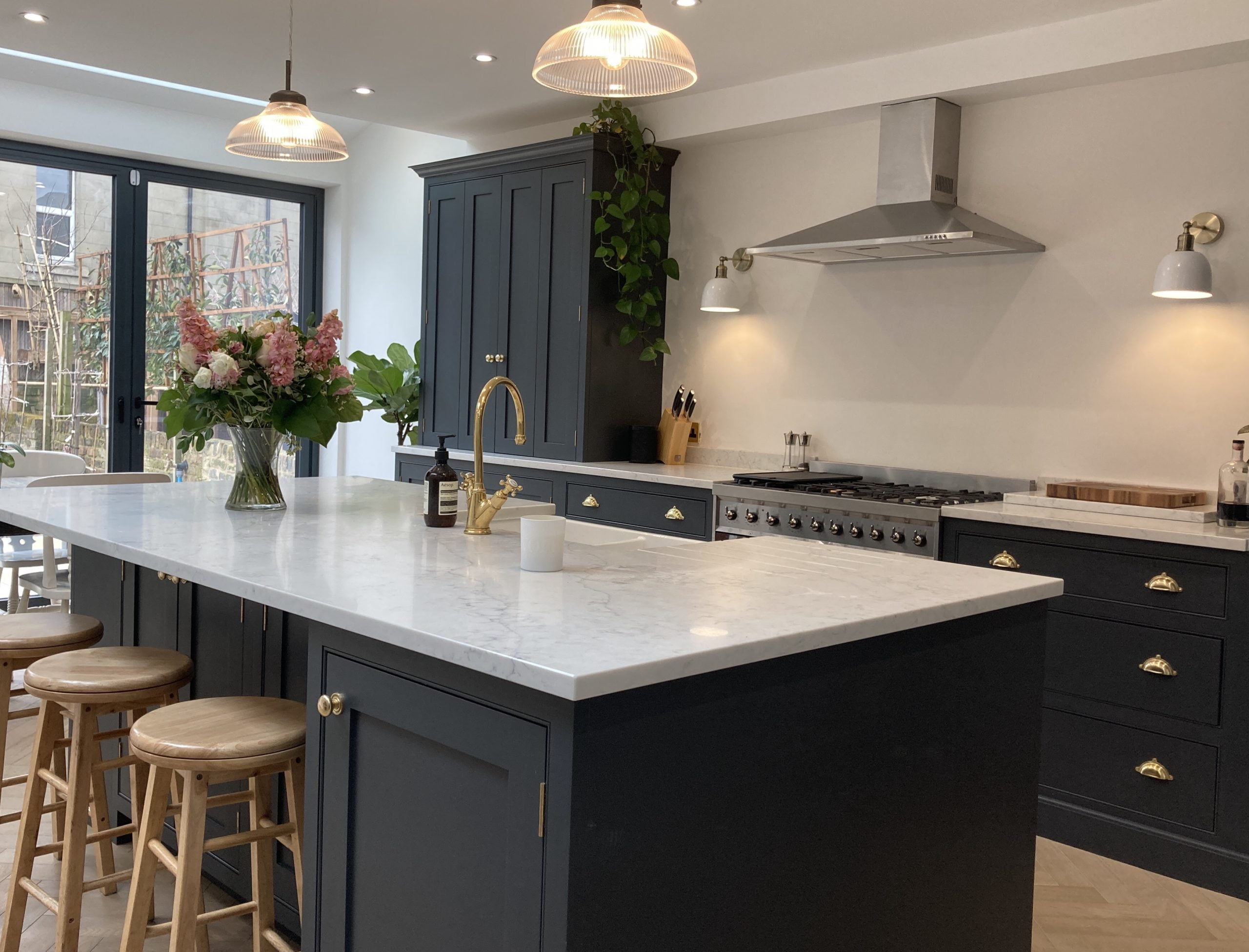 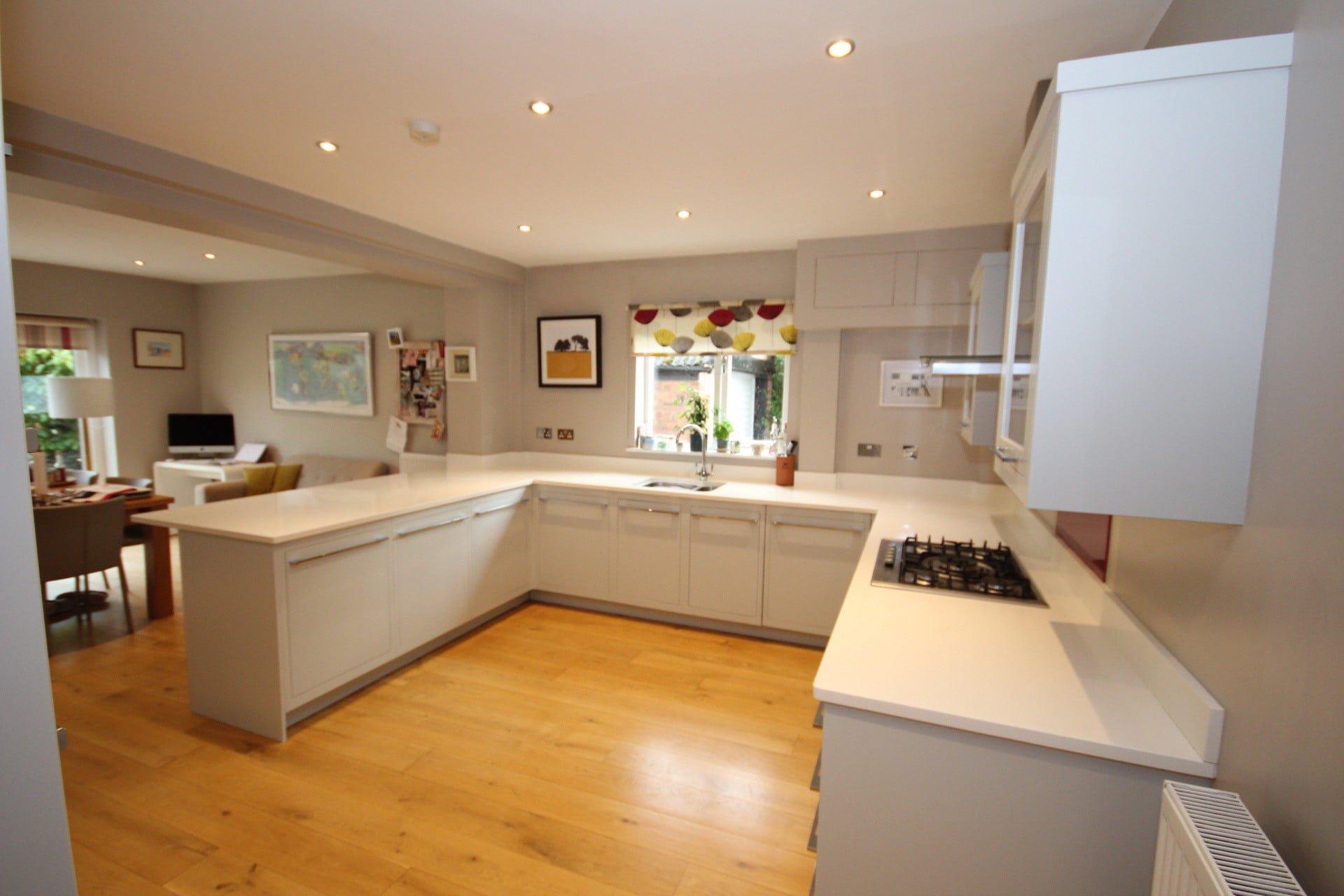 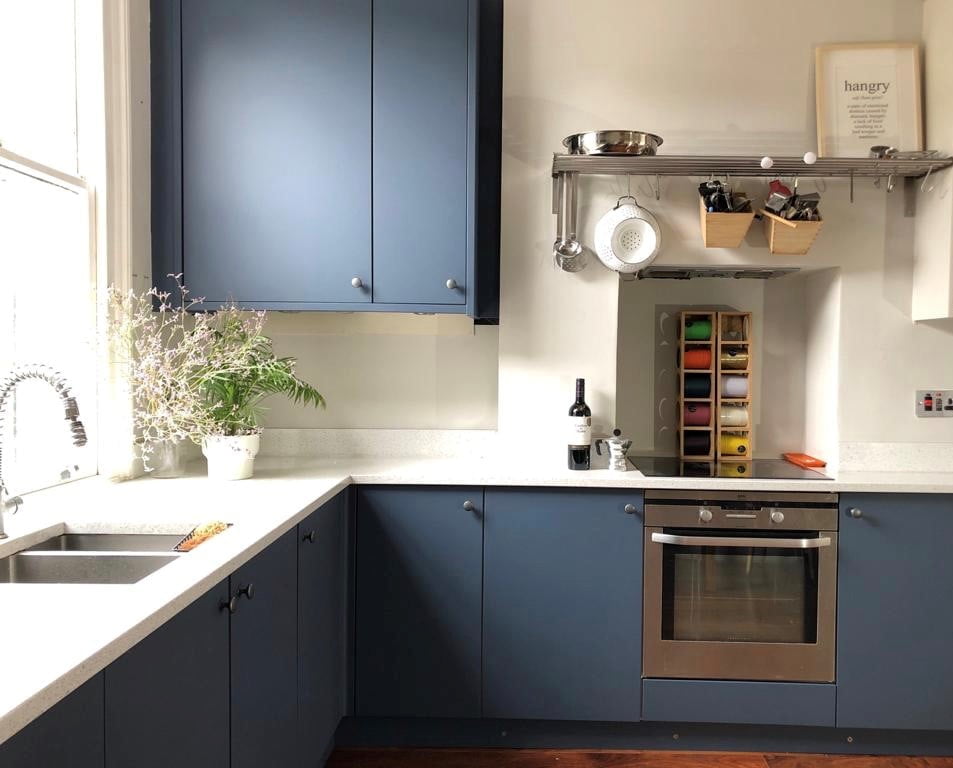